It has been confirmed that military police heavily deployed at the offices based in Makindye-Lukuli-Nanganda Road with no one allowed entry or exit.

Sources have also confirmed that the Executive director for Alternative Digitalk Norman Tumuhimbise, the Digitalk programs director Mukose Arnold Anthony and the public relations officer Faridah Bikobera Lilian, Lilian Luwedde, Teddy Teangel and more have been arrested and whisked off in a military drone to unknown destination. . 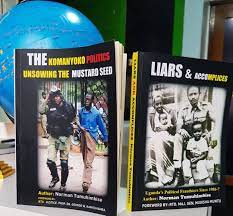 Alternative Digitalk is an online television platform owned by Norman Tumuhimbise who is also the national coordinator of the alternative movement, he is as well an activist who became popular for throwing branded yellow pigs in parliament and on Kampala streets.

The motive behind the siege is still unknown but Norman was planning to launch two controversial book titled; “The Komanyoko Politics -unsowing the Mustard Seed” and Liar and accomplicies which are critical of the ruling government and President Yoweri Museveni’s leadership.

The book launch was scheduled for 30th March 2022 at Imperial Royale.