The Government Chief Whip Thomas Tayebwa has urged Uganda Christian University (UCU) students to start saving groups if they are to thrive.

Speaking at UCU LaunchPad Debate Club in Mukono as guest of honor, Tayebwa advised students to observe savings discipline and trust amongst themselves.

He said that the biggest problem Ugandans have is a poor saving culture.

"We first eat, then we save, you can never grow like that, Friends, first save and then eat," He added.

Tayebwa told students to form saving groups— giving an example from Kenya, where most taxis are owned by Saccos of which some of them are owned by students.

"You're ten guys, you only meet for drinking, why can't you save a little and start something as a group," he asked.

"Form groups, don't work alone, own from small chicken business to small cafe, coffee shops, even in your hostels, you can do a delivery business," he added.

On his part, UCU Vice Chancellor Prof. Aaron Mushengyezi  hailed Government Chief Whip Thomas Tayebwa as  a man of action and a role model to the young people both at UCU and in the communities around Uganda 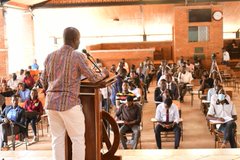 "Hon Tayebwa we are very proud of you for the work you  do for the government and for your leadership, we look at you and associate with you because you are a young leader and at the same time, you have done  tremendous work for this Country for the period you have been in leadership. So we look to people like you as role models for these young people both at UCU and in the Communities in Uganda to be a source of inspiration to them and to challenge them to be leaders with a difference both today and when they take up National leadership in this Country,"Prof.Mushengyezi said.

He added: "when you give him an assignment,he does it with perfection and that is why he is leading NRM Parliamentary caucus at Parliament very successfully."

UCU Guild President, Ms  Racheal Mirembe Sserwadda said they invited Government Chief Whip Thomas Tayebwa as a guest of honor because he is a man of their generation.